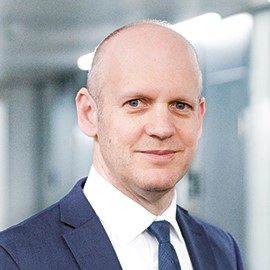 Swiss Post’s profit is lower than last year. What do you think of this decline?

This profit trend is in line with our forecasts. Swiss Post still has a healthy financial basis. The result has been affected by the ongoing low interest rates and the correction of the situation at PostBus. It is encouraging that, without exception, the other business units have achieved better results year-on-year. Our strategies and measures are proving effective.

Does the result restrict Swiss Post’s freedom of action?

Swiss Post has enough opportunities to develop the business. There is currently no need to reconsider our investments or the economically viable financing of the universal service. But the pressure on our business model remains high: declining letter volumes, the growth in parcels and the low interest situation will continue to pose challenges for us. High innovative capacity, optimal efficiency and an adequate regulatory framework therefore remain crucial.

Despite lower result: Swiss Post on the right track in challenging environment

In the year under review 2018, Swiss Post achieved good results in many units. However, at 405 million francs, Group profit was down 122 million francs year-on-year. In particular, the difficult operating framework at PostFinance and the settlement for repayments following the events at PostBus contributed to the lower result.

At 501 million francs, operating profit (EBIT) was 217 million lower than in the previous year. This confirmed Swiss Post’s expectations. Despite the challenging environment, the different Swiss Post units achieved very good results, with the exception of PostFinance and PostBus. The parcel market is booming, and PostLogistics achieved an improved result year-on-year, rising to 145 million francs. Thanks to Swiss Post Solutions, Swiss Post is on track in international business, and at PostMail, earnings rose by 18 million francs year-on-year to 388 million francs. The result at PostalNetwork also improved.

By contrast, the difficult operating framework at PostFinance is having a major impact on the Group result. Swiss Post therefore welcomes the Federal Council’s policy decision signalling its desire to lift the ban on loans and mortgages. “This is important for the future of PostFinance and Swiss Post, and for the financing of the universal service,” says Alex Glanzmann, Head of Finance. Declining letter volumes and pressure on prices – particularly in the logistics market – also call for new approaches and business models. “This requires bold, far-sighted and decisive action on the part of Swiss Post,” adds Glanzmann. The core business remains an economic cornerstone of Swiss Post activity. Swiss Post must act now and continue to generate profits if it is to maintain a high-quality internally financed universal service in the future.

The Federal Council has decided that PostFinance must build up additional equity due to its systemic importance. This means that PostFinance will only be able to afford to pay lower dividends to Swiss Post in future. This, in turn, means that the dividend amounts Swiss Post pays to the Confederation need to be discussed this year. Only by doing so will Swiss Post, in particular, be able to maintain its investment capacity in the long term.

Contributions by the business units

For detailed information on the Group result, see page 28 of the Financial Report 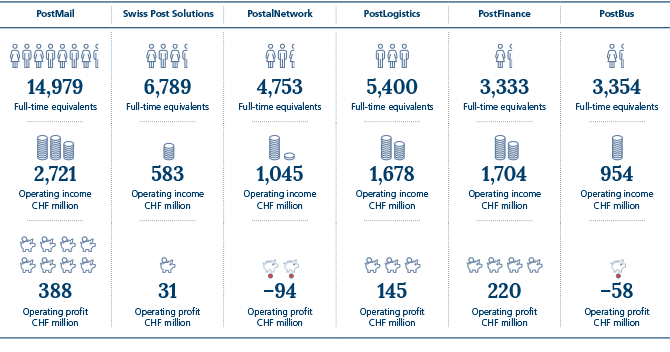